It’s mentioned that Caesars soldiers introduced the stinging nettle into Britain. They grew the nettle alongside the roads of Britain. After walking for miles the soldier’s legs will ache and they would beat each other legs with nettle to soothe the aches in their legs. The roads and the nettle still exist to this day. Culpeper says that the juice of nettle with honey is safe and has medicinal properties that opens the passages and pipes of the lungs. 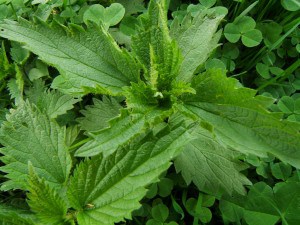 Today there are many uses for nettle. The extract of nettle mixed with alcohol serves as a stimulating hair tonic. Some rheumatic sufferers use fresh stinging nettle to beat their bare skin to relieve themselves from rheumatic pain. In the form of a juice, it reduces bleeding in the mouth. The juice also relieves painful hemorrhoids, when you take one tablespoon at a time for three times a day. Nettle has also been used topically to treat eczema and other skin rashes. Some of the active ingredients in nettle are histamine, formic acid, 5-hydroxytryptamine, Gallic acid, and Iron. According to the research of Dr. Herrmann and Neumann, after taking a glass of nettle juice the metabolic rate increased for hours. This was very useful when combined with therapies that remove toxins from the blood and for rheumatism.